Please note that on the basis of estimated data India produced 46.77 million tonnes of crude steel from January to October which was just ahead of United States. However, the revised data for India as well as United States for the period of January through October 2009 are as follows: 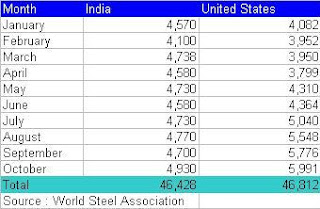 Now Lets look at the overall production figures for the year 2009: (the source of this table is World Steel Association)

So, based upon the above data , India is on Fifth Position in the world in Steel production till the end of 2009.