India became polio-free in the second week of 2014, three years after its last case of polio was detected in a 2 year old girl in West Bengal on Jan 13th, 2011. Since then, no new cases of polio have been officially recorded in the country. WHO will officially declare India as polio-free after it tests a few samples till Feb, 2014. This is nothing short of a miracle for a country which, until as recently as 2009, recorded the half the total number of polio cases in the world.

Polio is a crippling, life-threatening disease caused by the poliomyelitis virus. It spreads through contaminated food and water and mostly affects children under the age of five. Common symptoms include headache, lethargy, gastrointestinal upset, but paralysis and permanent disability also occur in some cases. There is no cure for polio but it can be prevented by taking polio vaccine. Polio was a major public health problem worldwide until a vaccine was developed in 1957. The 41st World Health Assembly held in 1988 adopted a resolution for global eradication of polio. Since then, polio has decreased by 99% worldwide. However, it was still highly prevalent in India due to various reasons such as poor sanitation and existence of large number of slum pockets, large population, poor health infrastructure, combined with varying attitudes towards vaccines among the people, with some in UP also believing it to cause impotency.

An important step towards achieving polio free status began in 1995 when India launched the Pulse Polio Immunization Programme which aimed at 100% coverage of immunization. Children in the age group of 0-5 were administered oral polio vaccines (OPV) during national and sub-national immunization rounds every year. Similarly, collaboration of the Indian government with various international organizations like WHO, Rotary International, UNICEF, etc. for a sustained and intensive polio immunization also played an important part. But a key initial missing piece of the puzzle was lack of data on the target population that had to be immunized. This was solved by the launch of National Polio Surveillance Project in 1997, a collaboration of Govt of India and WHO, which provided data to government officials and thousands of volunteer vaccinators on the most vulnerable population that had to be immunized with the polio vaccine. 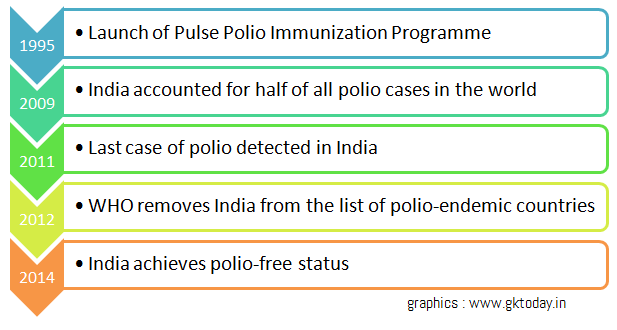 A major victory in the entire effort was the successful targeting of marginalized and mobile communities in the country. Vaccinators learned that mobile populations like seasonal workers at brick kilns and many other migrants are best reached not at home but in bus and railway stations. The marginalized populations in some parts of UP were not allowing their children to be immunized as they felt the vaccine could lead to impotency. During such times, social awareness campaigns run by UNICEF helped make these communities aware of the benefits of the vaccine. Additionally, media drives involving famous personalities such as Amitabh Bachchan who advocated the benefits of pulse polio programme, as the Goodwill Ambassador of UNICEF, also helped immensely.