El Niño and La Nina and their impact on Indian Weather

A recurring characteristic of the climate is called Climatic Pattern. The gap between two recurrences may be from one year to as long as tens of thousands of years. Some of the events are in regular cycle, while some are not. When they recur in the form of regular cycles of fluctuations in climate parameters, they are called climate oscillations. The term oscillation is used because such fluctuations are not perfectly periodic. For example, we say that El Nino returns every four and half years. But actually it may or may not return. Or it may return too early or too late. So, El Nino is quasi periodic.

El Niño was originally recognized by fisherman off the coast of Peru in South America. The ocean off the coast of Peru is one of the world’s richest fisheries regions. In most years trade winds flow from the southeast push warm surface water away from the coast. In its place, the cold water comes up on the surface due to upwelling. This cold water is full of nutrients and provides nourishments to planktons. These planktons serve as food for fishes. Fishes in turn provide food to the sea birds. Due to all this, not only there is a good catch of fishes but also good collection of the Guano, the bird excreta, used as a valuable fertilizer. This is what that made Peru number one fishing nation in the world by the early 1970s. 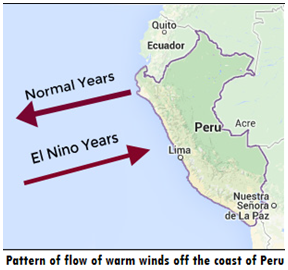 However, every few years, there is a change in the pattern of air circulation. It changes in such a way that the trade winds reverse direction, blowing from west to east. Due to this reversal, the upwelling of the cold water gets weakened. The surface water is warm. This lowers the nutrients available to fish and thus poses problems to the economics of fisheries. The problems don’t end here. The accumulation of large mass of warm water allows formation of more and more clouds and this would bring destructive rains that occur in normally dry areas of Peru and Chile. The same is also responsible for bring outbreaks of Malaria and Cholera in some parts of South America. Peru , as you may know is a Hispanophone country as many people speak Spanish out there. The above mentioned reversal of the winds occurred during Christmas times (Please note that we have Christmas in winter, but Peruvians have in summer, because they are in southern hemisphere), so they named it El Niño or “Christ Child” or “The Little Boy” in their own language. Before, you read further, please understand the location of Eastern, Central and Western Pacific on the map, otherwise it would be too confusing (earth is round…after all)

Now, here is how it affects the entire tropical region.

Although El Niño originally referred to local conditions off the coast of Peru and Ecuador, the use of the term has been broadened by many scientists to represent all surface temperature warming in the eastern and central Pacific. The impacts of El Niño , which have been well documented include the following:

La Niña, which means “The Little Girl” or “El Viejo” or “anti-El Niño” or simply “a cold event” or “a cold episode is the cooling of water in the Eastern Pacific Ocean. Here is what happens in La Niña.

Both El Nino and La Nina are part of a larger cycle called ENSO, or El Niño–Southern Oscillation. The El Niño (warm event) and La Nina (Cold event) both have now established themselves as the integral part of the global climate system. It is a recurrent phenomenon with an average return period of 41/2 years, but can recur as little as 2 or as much as 10 years apart. Such events have occurred for millennia, and can be expected to continue to occur in the future.

Impact of El Niño and La Nina on Indian Weather

Do El Nino and La Nina explain most of the unusual climatic happenings?

It is undeniable that the El Nino has been used to explain unusual climatic changes across the globe. But, modern climatology taken into account various other phenomena also. However, El-Nino has far-reaching and varied effect on climate across the world. The major reason for these unusual climatic happenings is the shifting in tropical rainfall, which in turn affect the wind patterns across the world. When the El-Nino effect causes the rainy areas centered around Indonesia and the Pacific region to move eastward, the subsequent changes result in unseasonable weather in many regions of the world. The El Nino is typically characterized by warm ocean currents and heavy rains, however, it also plays havoc with the normal weather conditions in different areas of the world. Also, the increase in temperatures affects fishing adversely, disrupts local weather and indigenous marine life in the areas concerned, other than having an effect on climatic conditions worldwide. When the linkage between El Nino and climate effects were initially suggested by the British scientist, Gilbert Walker, it was deemed ridiculous that one phenomenon could have an effect on regions as far off as Australia, India etc and Canada. However, the occurrence of El Nino in the past few decades has proved without a doubt, their far-reaching consequences. Some of the effects of El Nino in the past have been causing of droughts and forest fires in South Asia (Indonesia and Philippines) and Australia, floods in the South American countries in the eastern Pacific region, increased rain in certain other areas of the world etc.