We note that in 1951, India produced a meagre 5 million tonnes of oil seeds. This number went up to 9 million tonnes in 1970 and there has been remarkable progress. Currently, oil seeds share 14% of the area under major crops. At present, India’s largest oilseed producing state is Gujarat, thanks to its position as top groundnut producing state of India. Rajasthan is India’s top Rapeseed & Mustard producing state, followed by Madhya Pradesh and Haryana. Almost half (48.12%) of Rapeseed and Mustard is produced by only Rajasthan. India’s top Soyabean producing state is Madhya Pradesh with a share of 44% in India’s total production of this protein rich crop. Among other oil crops, Karnataka is largest producer of Sunflower. 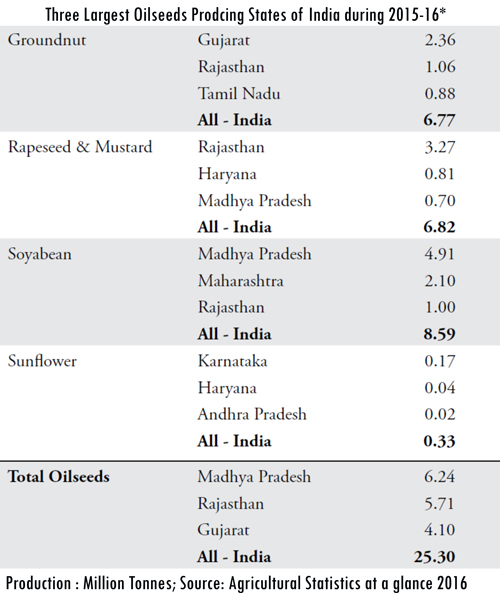 Primary sources cover around 60MT of the total demand, while secondary cover 29 MT, thus making domestic supply to meet around 89MT of the total domestic demand. Of this, around 5MT is exported or used in industries. The Net domestic availability of Edible Oils thus remains around 86.37 MT and rest is met through imports. In 2015-16, India imported 148.20 million tonnes of edible oils. Thus, India has an alarming level of import dependency on oil.

The above discussion makes it clear that a huge demand-supply gap exists and India is number one edible oil importer of the world. The 60-65% import dependency worsens during the unfavorable monsoon years.

The reason is that domestic demand for vegetable oils and fats has been rising rapidly at the rate of 6% per year but domestic output has been increasing at just about 2 per cent per annum. In India, the average yields of most oilseeds are extremely low as compared to those other countries of the world. The cultivation of oilseeds in India is in high risk regions where there are uncertain returns on the investments.

The policy impetus to oilseed production in India came for the first time in 1986 when the government launched Technology Mission on Oilseed. This was a golden period for oilseed production in India when productivity jumped from 670 kg per hectare in the eighties to 835 kg per hectare in the nineties. However, after that there has been a slow pace of growth. Today, the major problem in oil seeds production is low productivity. India is way behind the developed countries and neighbouring countries like China in its productivity of oil seeds per hectare. Since the increase in production could not keep pace with increased demand, India became more and more dependent on edible oil imports. One of the biggest constraints to raising oilseed output has been that production is largely in rain-fed areas. Only one fourth of the oilseed producing area in the country remains under the irrigation.

Apart from this, other measures would include market reforms and policies, such as contract farming and public-private partnership in production and processing, to ensure a competitive market for oilseeds and edible oil along with adequate protective measures to avoid unfair competition from the international markets.

Groundnut is most important oil seeds of India accounting for half of the major oilseeds produced in the country. Groundnut is predominantly a Kharif crop but is also sown as a Rabi crop. 90-95% of the total area is devoted to kharif crop. It is a legume which thrives best in tropical climate and requires 20°C to 30°C temperature; 50-75 cm rainfall. The crop is highly susceptible to frost, drought, continuous rain and stagnant water. It needs dry winder at the time of ripening.  Well drained light sandy loams, red, yellow and black soils are well suited for its cultivation. In 2015-16, the top three states producing ground nut were Gujarat, Rajasthan and Tamil Nadu.

Mustard is second most important oil seed crop of India after Groundnut. This planet belongs to cabbage family (Brassica) and farmers in India mainly grow three species of Mustard as follows:

Mustard seeds have 25-45% oil content and its oil cake makes an important cattle feed and manure. The plant thrives in north and west India, mainly Satluj-Ganga plain. Its generally grown as a Rabi crop either purely or as mixed cropping with wheat or gram or barley. India has largest area and highest production of mustard. Currently, Rajasthan is top Mustard producing state of India, followed by Haryana and MP.

The Sesamum seed comprises of 45 to 50 per cent oil used for cooking purposes and for manufacturing perfumery and medicines. India has the world’s largest area under Sesamum and is also the largest producer of this crop accounting for one-third of the world production. Its mainly a Rainfed crop in India.

Linseed (Alsi in Hindi) has a unique drying property and is suitable for manufacturing of paints, varnishes, printing ink etc. A small part is used as edible oil also.

Castor seed comprises 50 per cent oil. It is mostly used in industries.

India produces a very small fraction of palm oil but is one of the largest consumers. Most of India’s palm oil requirement is met by imports from Indonesia and Malaysia.