Earthquake Magnitude and Earthquake Intensity are two terms often misunderstood. Earthquake magnitude is a measure of the size of the earthquake reflecting the elastic energy released by the earthquake. It is referred by a certain real number on the Richter scale (such as magnitude 6.5 earthquake).

On the other hand, earthquake intensity indicates the extent of shaking experienced at a given location due to a particular earthquake. It is referred by a Roman numeral ( such as VIII on MSK scale). Intensity of shaking at a location depends not only on the magnitude of the earthquake, but also on the distance of the site from the earthquake source and the geology / geography of the area. We note here that the Isoseismals are the contours of equal earthquake intensity. The area that suffers strong shaking and significant damage during an earthquake is termed as meizoseismal region.

The concept of earthquake magnitude was first developed by Richter and hence the term “Richter scale”. The value of magnitude is obtained on the basis of recordings of earthquake ground motion on seismographs.

Richter magnitude scale is a base-10 logarithmic scale obtained by calculating the logarithm of the shaking amplitude of the largest displacement from zero on Wood-Anderson torsion seismometer. It was developed in 1935 by Charles Richter in partnership with Beno Gutenberg, both of the California Institute of Technology.

A difference in magnitude of 2.0 is equivalent to a Factor of 1000. It is shown below:

The Richter scale is denoted by ML. This scale was replaced in 1970s by the new Moment magnitude scale which is denoted as Mw. The scale is almost same and media uses the same term “Richter Scale” for the new MMS also. This is because medium earthquakes such as 5.0 are equal on both the scales.

Shindo scale is also known as Japan Meteorological Agency (JMA) seismic intensity scale. It is used in Japan and Taiwan to measure the intensity of earthquakes. It is measured in units of Shindo which literally means degree of shaking. Unlike the moment magnitude scale, which measures the energy released by the earthquake, the JMA scale describes the degree of shaking at a point on the Earth’s surface. Thus it is similar to Mercalli intensity scale. The Shindo Scale ranges between Shindo-0 to Shindo-7.  Shindo-0 quake is not felt by most people, while Shindo-7 is most devastating earthquake. However, note that same earthquake has different Shindo numbers at different places. For example, 2011 Great Earthquake of Japan registered Shindo-7 at Kurihara, Miyagi Prefecture, while Shindo-6 at Fukushima, Ibaraki and Tochigi and Shindo-7 in Tokyo.

Prior to the development of ground motion recording instruments, earthquakes were studied by recording the description of shaking intensity. This lead to the development of intensity scales which describe the effects of earthquake motion in qualitative terms. An intensity scale usually provides ten or twelve grades of intensity starting with most feeble vibrations and going upto most violent (i.e., total destruction). The most commonly used intensity scales are: Modified Mercalli (MM) Intensity Scale and the Medvedev-Sponhener-Karnik (MSK) Intensity Scale. Both these scales are quite similar except that the MSK scale is more specific in its description of the earthquake effects. Medvedev-Sponheuer-Karnik scale denoted by MSK or MSK-64, is a macro seismic intensity scale which is used to evaluate the severity of ground shaking on the basis of observed effects in an area of the earthquake occurrence. It was proposed by Sergei Medvedev (USSR), Wilhelm Sponheuer (East Germany), and Vft Karnfk (Czechoslovakia) in 1964.

MSK-64 is used in India, Israel, Russia, and throughout the Commonwealth of Independent States. In India the seismic zoning has been done on the basis of this scale. This scale has 12 intensity degrees expressed in Roman numerals, which are shown in the below graphics. 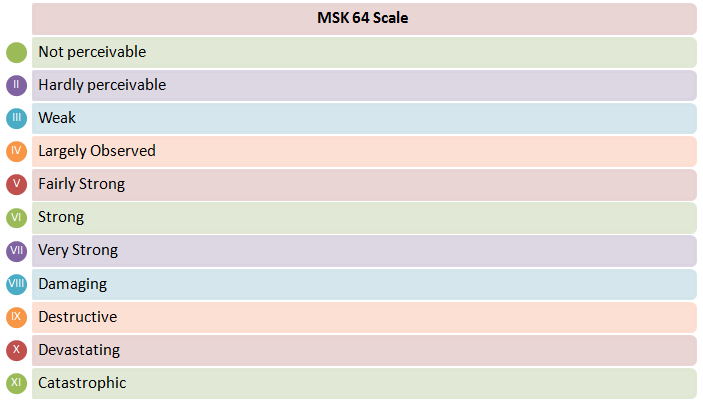