Prime Minister of Lebanon resigns after outrage over blast 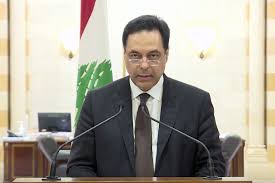 The Prime Minister of Lebanon, Hassan Diab announced his resignation from the top post of the country following outrage over the catastrophic blast in the capital of the country, Beirut, on August 4. The mishap took away lives of around 150 people and injured more than 5000 people.

What happened in Beirut, Lebanon?

On August 4, due to the 2750 tonnes of ammonium nitrate stored in one of the warehouses in the port of the capital city of Lebanon, a blast took place. The blast killed more than 150 people and also rendered thousands of people homeless. The blast severely damaged a part of the whole city as well. The Primary Healthcare Centres and the hospitals also got damaged because of this incident.

Following this incident, the public anger mounted on the government since it has been assumed that the government was not careful enough to ensure the safety of explosive material stored in the area. It should have been more careful in handling such things and due to that lack of sincerity, so many people died in the blast. The materials had been lying in the port area since 2013 and the material was not taken care of properly by the authorities. The intense protest erupted due to this mishandling and as a result, the PM of the country has now resigned.

The Prime Minister has announced his resignation at the cabinet meeting and has also intimated the President. The President of the country Michel Aoun will now determine the next steps. The PM along with his council of ministers will be interim head till the new government is installed in the country.

Hassan Diab is a professor and also a former minister of Education in the government of the country. He became the PM of the country in January. Since he took over, he has faced many challenges that forced his predecessor, Saad Hariri, to resign also. Even before this mishap, the country had been experiencing protests over allegations of political corruption and frustration with an imminent economic crisis in the city.

Lebanon has a power-sharing government structure in which different groups are represented by an arm of the government. The political system of the country requires that the Presidency must go to a Christian, the PM should be a Sunni Muslim and the speaker of the parliament must be a Shiite Muslim. However, this system has faced widespread criticism due to the fact that it has actually led to political instability and division.