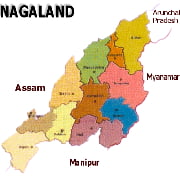 The Ministry of Home Affairs recently declared Nagaland as “Disturbed Area” for the next six months under the Armed Forces (Special Powers) Act, 1958.

What is the current scenario of AFSPA in Nagaland?

Nagaland was declared as “disturbed area” for a period of six months on June 30, 2020. The state has been under AFSPA for more than six decades now. The act was not withdrawn even after signing the agreement between Nationalist Socialist Council of Nagaland and GoI.

Why Nagaland continues to be “Disturbed Area”?

Nagaland has been declared as ‘disturbed area’ as there have been killings, extortion and loot in various parts of the state. Even after eighty rounds of negotiations for more than eighteen years, the demands of NSCN-IM do not seem feasible. The NSCN-IM is demanding for separate flag and constitution. This demand is not acceptable by the central government. This leads to the continuation of insurgency in the region. Thus, Nagaland continues to be declared as “Disturbed Area”.

What is a Disturbed area?

A disturbed area is declared by notification under Section 3 of AFSPA. It is invoked in places where the use of armed forces is necessary to aid the civil power.

Who can declare a region as “Disturbed Area”?

The Governor of the state or the central government can declare the whole or part of the state or union territory as disturbed area. Once declared, the region will continue to remain in “disturbed” category for three months according to the “Disturbed Areas (Special Courts) Act, 1976”. The State Government can only suggest if the act is required or not.

What are the other recent steps taken by GoI to ensure peace in North East?