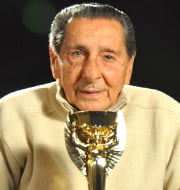 Uruguayan soccer legend Alcides Ghiggia has passed away due to heart attack in Montevideo, Uruguay. He was 88.
He had scored the winning goal against Brazil in the final match of World Cup 1950 which had helped Uruguay to win World Cup for the second time. He had scored the deciding goal 10 minutes from time when the final match had tied at 1-1 goals.
It was historic win for Uruguay and Brazil’s greatest defeat, which is still known in Brazil at the Maracanazo. Uruguay for the first time had won the FIFA World Cup in 1930 which was the inaugural Football World Cup.
Ghiggia was born on 22 December 1926. He started his professional career with the famous Uruguayan football club Penarol. Later he had played in Italy with Roma and AC Milan football clubs. He also had played several matches with the Italian Football national team.