Oldest DNA recovered from the Teeth of Siberian mammoths 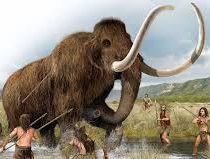 The Scientists have recovered the oldest DNA on record from the teeth of Siberian Mammoths.

The remains of the mammoths were discovered in the early 1970s. However, since then, new scientific methods were required to extract the DNA.

It is the species of extinct elephantid of genus Mammuthus. The mammoth was equipped with the long, curved tusks and a covering of long hair. They were found from the Pliocene epoch to the Holocene some 4,000 years ago. The species existed in Europe, Africa, Asia and North America. They belonged to the family Elephantidae. The family also comprises of two genera of modern elephants and their ancestors.

It is Deoxyribonucleic acid which is composed of two polynucleotide chains. These chains are coil around each other and form the double helix. The helix carries the genetic instructions for the growth, development, functioning, and reproduction of organisms and viruses. It is a self-replicating material carrying the genetic information of the living organisms.