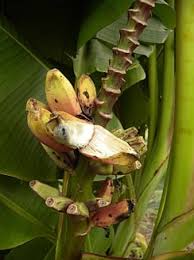 Botanists have discovered new species of wild banana named Musa paramjitiana in Andaman and Nicobar Islands. It has been name in honour of Paramjit Singh, director of the Botanical Survey of India (BSI
Musa paramjitiana species was discovered in North Andaman’s Krishnapuri forest, 6 kilometres from any human habitation.

Musa paramjitiana species grows to height of nine metres and bears an edible, sweet-and-sour tasting fruit that is boat-shaped and has numerous bulb-shaped seeds.  The fruit of Musa paramjitiana is part of diet of local tribes.
Its fruits and seeds have ethno-medicinal importance. Pseudo-stem and leaves of these species are also used during religious and cultural ceremonies.
Its conservation status has been declared as ‘Critically Endangered’ as it has so far been spotted in only two locations on islands, each with 6 to 18 plants in a clump. No population has been located in other regions of Islands.

Andaman and Nicobar Islands are biodiversity hotspot and hosts seven different species of wild banana. In 2014, another wild banana named Musa indandamanensis was discovered in remote tropical rain forest on the Little Andaman island. It has dark green cylindrical flower buds.
These discoveries present great opportunity for plant breeders and horticulture experts to improve existing banana crop. The germplasm of all wild banana species also needs to be conserved on an urgent basis, since most of these are found in very small habitats and at risk of extinction.