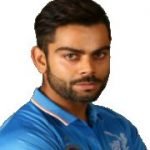 Indian Cricketer Virat Kohli has become the only cricketer to get featured in the top 10 of the ICC Players Rankings for ODIs as he managed to stick to the third spot in the ODI batsman’s chart.

The top three batsmen featured in the ICC ODI Rankings are South Africa’s De Villiers (874), Australia’s David Warner (871) and Kohli (852). The other Indian batsmen who feature in the list are  Rohit Sharma (12th), MS Dhoni (13th) and Shikhar Dhawan (15th). In the top 20 positions of  the list, India, South Africa and England have four batsmen each inside the top 20 while New Zealand (three), Australia and Pakistan (two each) also have registered significant presence.

In the ICC bowler’s chart, India’s left-arm spinner Axar Patel shares 11th position along with New Zealand’s Matt Henry. However, not even a single Indian has featured in the top 10 list of bowlers. The bowler’s chart has been  headed by Kagiso Rabada of South Africa. The second and third positions were occupied by Imran Tahir (722) and Mitchell Starc (701).
The other Indians who feature in the top 20 list include Amit Mishra (13th) and off-spinner Ravichandran Ashwin (joint 18th).
Among the bowlers, Bangladesh and England have three bowlers each inside the top 20, followed by New Zealand, South Africa and Australia with two each.