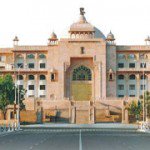 The Rajasthan Assembly has passed the demand for grants of Rs 370.60 for the higher education by voice vote on March 16, 2021.

Demand for Grant is a form where the estimates of expenditure from the Consolidated Fund are included in annual financial statement or the Budget. The demand for grant is required to be voted upon in Lok Sabha or in the state assembly.  The demand for grants is submitted in light with Article 113 of the Constitution. It comprises of the provisions with respect to the revenue expenditure, grants to state & Union Territory governments, capital expenditure along with the loans and advances. The demand for grant is presented with respect to each ministry or department. On the other hand, for the large ministries and departments more than one demand is put forward. It includes both the voted as well as the charged expenditure.

This articles states that, proposal or estimate seeking the withdrawal of money from Consolidated Fund of India shall be presented to the Lok Sabha in the form of demand for grants. It is presented to Lok Sabha only after approval is given by the President of India.

Who proposes Demand for Grants?

The demand for grants is proposed and prepared by the ministry for the expenditure which will be incurred in next financial year. These demands for grants are collectively presented in the Lok Sabha under the Union Budget.