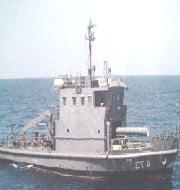 INS Astravahini, indigenously built torpedos launch and recovery vessel was decommissioned after its service for almost 31 years to the nation.
It was decommissioned in a ceremony held at the Ship Building Centre (V) at Visakhapatnam, Andhra Pradesh. The vessel had immensely contributed in the trials of indigenous torpedoes developed by Naval Science and Technological Laboratory (NSTL).
INS Astravahini was an auxiliary vessel of the torpedo launching and recovery (TLRV) class. It was commissioned in Indian Navy in 1984, at Visakhapatnam and served for about 31 years.
It was only one of its class and was extensively used by the NSTL as a test platform to launch and recover experimental torpedoes for their induction into the Indian Navy. In her long service the ship had enhanced and played important role in indigenous torpedo induction.