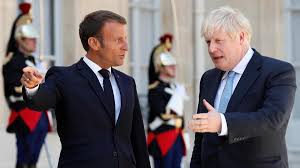 On the sidelines of the Libya Summit held in the capital city of Germany, Berlin on Sunday, 19th January 2020 the President of France, Emmanuel Macron and the British Prime Minister Boris Johnson has reiterated their commitment to the JCPoA (Joint Comprehensive Plan of Action) for 2015 Iran nuclear deal and has acknowledged the need to prevent Iran acquiring a nuclear weapon by defining a long term framework. The 2015 deal, was signed between the global powers (France, Russia, United Kingdom, China, Germany, US, and the European Union) and Iran under which in exchange of lifting sanctions imposed on Iran by the global powers, Iran agreed on to put a limit on their Uranium enrichment capacity, however, the deal suffered a setback in 2018 when the United States decided to withdrew from the pact. The developments are followed by rising tensions between the US and Iran since the targeted killing of Qassem Suleimani by the US on 3rd January took place, over the last week the war of words continued between the US President Donald Trump and the Supreme Leader of Iran, Ayatollah Khamenei.