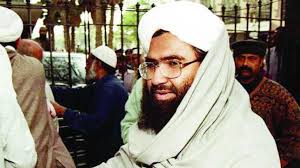 The United Nation Security Council (UNSC) 1267 Committee designated Pakistan-based Jaish-e-Mohammed chief Masood Azhar as a “global terrorist” after China lifted its prolonged hold on proposal to blacklist him. The move is a huge diplomatic win for India. It is also a symbolic victory for India in relation to terrorism spreading from groups in Pakistan as Masood Azhar is considered a blue-eyed boy of ISI (Pakistan’s spy agency).