EX TSENTR 2019: India, Pakistan forces to be part of military exercise in Russia 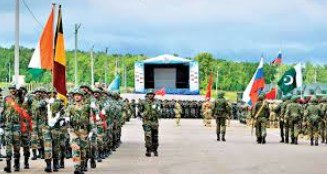 Armies of India, Pakistan will take part in this year’s military exercise TSENTR 2019 that will be conducted by Russia from September 9 to 23, 2019. This will be the first time that forces from India and Pakistan will participate in multilateral exercise together since airstrikes conducted by Indian force, deep in Pakistan’s Balakot district in February 2019. Earlier armies of India and Pakistan had met last year as part of military exercise conducted by Shanghai Cooperation Organisation (SCO) – also held in Russia.

It will be conducted as part of the annual series of large scale exercises that form part of Russian Armed Forces’ annual training cycle. This year it will be conducted by Central Military Commission of Russia at Donguz training ranges, Orenburg, Russia. Apart from host Russia, military contingents from China, Tajikistan, India, Kyrgyzstan, Kazakhstan, Pakistan and Uzbekistan will also take part in this mega event.

This year’s exercise is aimed at evolving drills of participating armies in fight against international terrorism and ensuring military security in strategic central Asian region. Its strategic measures will mainly focus on evaluating level of troop preparedness, raising level of inter- operability, acquisition of required skills and demonstrate readiness of participating armies.

It will comprise two modules-

(ii) 2nd Module: It will focus on offensive operations.