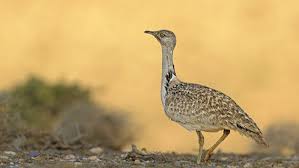 The controversial private hunting expeditions of Houbara Bustard by the Dubai Royals date back over four decades. The hunting continued even after the Pakistan Supreme Court imposed a blanket ban on the killing of Houbara Bustard in 2015. However, the order was reversed.

The Houbara Bustard is a large terrestrial bird found in the parts of Asia, Africa and middle east. After breeding in central Asia during spring, the Houbara bustards migrate south to spend the winter in Pakistan.

Over the four decades, the Pakistan foreign ministry extended yearly invitations to the wealthy and powerful Arabs for hunting the Houbara Bustard in the deserts of Punjab and Balochistan to strengthen their relations with the Arabs. The Arabs kill the birds for sport and also for their meat. The meat of Houbara Bustard is said to have aphrodisiac qualities.

Pakistan permits the Arabs to hunt a total of 100 bustards in a designated area during a ten-day safari. However, in 2014, a Saudi Arabian prince shot more than thousands of Houbara bustards during a three-week hunting safari. This created nationwide outrage from conservationists.

India and Arab in hunting

Similar expeditions had taken place in India as well in the borders of Rajasthan. The Arabs used to hunt Great Indian Bustard in the borders. The practice was banned in 1972.