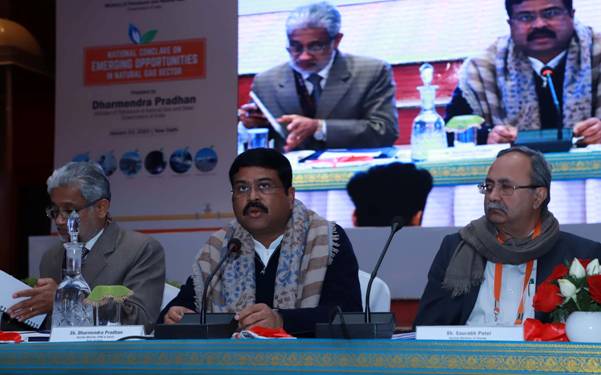 The ‘National Conclave on Emerging Opportunities in Natural Gas sector’ was held in New Delhi on Thursday, 23rd January 2020. The Union Minister of Petroleum and Natural Gas, Dharmendra Pradhan presided over the conclave.

The Minister said that that the current share of gas in India’s energy basket is 6.2 percent and the target is to increase it to 15 percent by the year 2030. He also stated that the state of Gujarat has a 26 percent share of gas-based energy, which is more than the world average of 24 percent.  The domestic gas production in the country is estimated to be around 34.55 billion cubic meters in the upcoming fiscal, which is likely to keep increasing in the upcoming year’s as the Government of India has sanctioned viability Gap funding of Rs 10,500 crore for laying pipeline network in the North Eastern and Eastern part of the country, which once completed, India will have a gas pipeline network from Kashmir to Kochi and Kutch to Kohima.