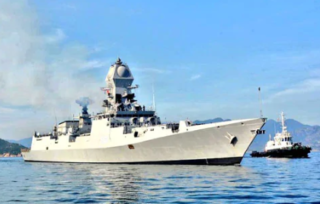 Indian Navy warships INS Kolkata and tanker INS Shakti will take part in the Chinese international fleet review to be held at Qingdao on April 23.
The International Fleet Review is being held by China to commemorate the 70th Anniversary of the People’s Liberation Army’s Navy. More than 60 countries are expected to join the commemorative event on 23 April.

INS Kolkata is an indigenously built stealth guided missile destroyer equipped with state-of-the-art weapons and sensors to address threats in all dimensions of naval warfare whereas INS Shakti is a fleet support ship. INS Shakti is one of the fleet ship capable displacing over 27,000 tonnes and capable of carrying 15,000 tonnes of liquid cargo and over 500 tonnes of solid cargo including victuals and ammunition.
The participation of Indian Ships is aimed at projecting the Indian Navy’s indigenous shipbuilding capability together with showcasing India’s strength in the waters and its reach and sustainability.