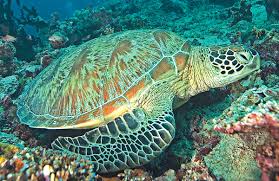 The turtle population in Red Sea is turning female due to rise in sea temperature. A Team of researchers from the Saudi Arabia King Abdullah University of Science and Technology conducted a study. They selected five sites in the region that are favoured by Green Turtles and Hawksbill.
The researchers collected data for every fifteen minutes for five months. According to the researchers, to maintain 50:50 ratio of males and females population, temperature of 29.2 degrees Celsius is required. Above this temperature, the turtle hatchlings will predominantly be female. The researchers during the study found that the temperature at four out of the selected five sites exceeded 29.2 degrees Celsius.

Different turtles are classified differently by IUCN. The classification is as follows

Conservation of Turtles in India

In India, the Green Turtle and Hawksbill turtles are listed under Schedule I of the Wildlife Protection Act, 1972. Turtles are also protected under the Biodiversity Conservation and Ganga Rejuvenation programme. India has five species of turtles. They are Olive Ridley, Loggerhead, Leatherback, Green Turtle, Hawksbill.