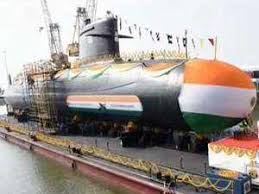 The Indian Navy launched fourth Stealth Scorpene-Class submarine ‘INS Vela’ at state owned Mazagon Dock Shipbuilders Limited (MDL) in Mumbai, Maharashtra. This is fourth submarine that was launched by MDL after it entered into contract with French collaborator Ms Naval Group (earlier known as DCNS) for construction and transfer of technology for six Scorpene class submarines under Project 75.

MDL was first shipyard in India to build submarines back in 1992, when dock built INS Shalki.

NOTE: INS Kalvari, the first submarine in Scorpene class, has already been commissioned, while others are at adavance level of trial and test. The third in Scorpene series INS Karanj was launched in January 2019. The fifth Scorpene-class submarine INS Vagir and sixth Scorpene-class submarine INS Vagsheer are in advanced stages of manufacturing on the assembly line and will be launched soon.