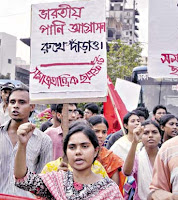 Why to build a dam?
This dam was planned to contain the flood waters in the lower Barak Valley. Hydro Power Generation was also added in this project later. National Hydro-electric Power Corporation (NHPC)is developing the Rs.81.38 billion ($1.7-billion) hydel project to generate 1,500 MW of power.

What is Bangladesh’s Point?

What is India’s Point?

The following three organizations have also protested the dam.
Citizens Concern for Dams and Development (CCDD),
Committee on Land and Natural Resources (COLNAR)
Action Against the Tipaimukh Dam Project (ACTIP).
Current Situation:
Bangladesh Foreign Minister Dipu Moni will come to India early next month (September 2009) to discuss the Tipaimukh dam issue and to follow up on assurances given to a parliamentary delegation that went to study the site.