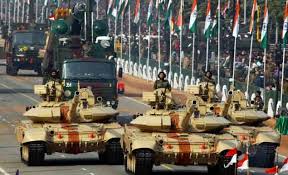 According to recently released report of Stockholm International Peace Research Institute (SIPRI), India has emerged as fifth largest military spender in 2017. India had spent $63.9 billion on defence in 2017, an increase of 5.5% compared with 2016, when it was in the sixth spot overall.

India’s defence spending: It was higher than that of France ($57.8 billion), UK ($47.2 billion) and Germany ($44.3 billion) in 2017. It has grown in past decade for several reasons, including mounting salary bill for about 1.4 million serving personnel and pensions for more than 2 million veterans, projects worth billions of dollars to induct new warships, combat fighter jets, helicopters, artillery guns and infantry weapons and to enhance capabilities. India has been world’s largest weapons importer in last five years and arms exported by US to India during 2013-17 registered a 557% jump when compared to 2008-12.
China: It was second-largest defence spender globally in 2017. It had increased its defence spending by 5.6% to an estimated $228 billion in 2017. It defence spending share in global military expenditure rose from 5.8% in 2008 to 13% in 2017. It also accounted for 48% of Asian total and was 3.6 times that of India.

It in international institute based in Stockholm, Sweden. It dedicated to research into conflict, armaments, arms control and disarmament. It was established in 1966. It provides data, analysis and recommendations, based on open sources to policymakers, researchers, media and interested public.