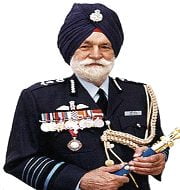 The sole Marshal of the Indian Air Force (IAF) Arjan Singh passed away following cardiac arrest in New Delhi. He was 98. He was known for shaping IAF in its early years as well as during some of its most difficult junctures.
In 2002, on the occasion of Republic Day, he was granted honorary rank of Marshal, highest military rank attainable, which before him only two Army chiefs, K M Carriappa and Sam Manekshaw, had achieved.

Arjan Singh was born on April 15, 1919, in Lyalpur (now Faislabad, Pakistan). He had completed his education at Montgomery (now Sahiwal, Pakistan).  He was selected to Empire Pilot training course at Royal AirForce (RAF) Cranwell at age of 19 years. He had served on different positions in RAF during British Rule.
On August 15, 1947, he had achieved a unique honour of leading a fly-past of over a hundred IAF aircraft over the Red Fort in Delhi. He had served as the IAF chief from August 1964 to 69. He was the first Indian Air Chief to be elevated to the rank of Air Chief Marshal in 1966.
He had led the Indian Air Force (IAF) in the 1965 India-Pakistan war. He had launched IAF’s Operation Grand Slam that targeted at the vital town of Akhnoor of Pakistan. He retired in August 1969 and later was appointed as Ambassador of India to Switzerland and High Commissioner to Kenya. He also had served as Lieutenant Governor of New Delhi from 1989 to 1990.
Awards and Honours: In recognition of his lifelong services, Union government conferred the rank of the “Marshal of Indian Air Force” on him in 2002 making him the first and the only ‘Five Star’ rank officer with the IAF. He was awarded Padma Vibhushan for his astute leadership of the Air Force during the India-Pakistan war.