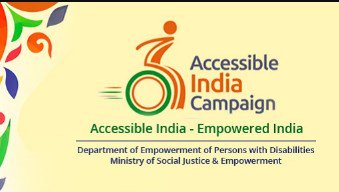 The Department of Empowerment of Persons with Disabilities (PwD), under Union Ministry of Social Justice and Empowerment has developed a Management Information System (MIS) for stakeholders of Accessible India Campaign.

MIS portal will bring all the nodal ministries and States and Union Territories (UTs) on a single platform for monitoring the progress being made against each target of Accessible India Campaign (AIC).

The portal is made fully accessible for Divyangjans.

It will be useful in maintaining all the function on digital platform and capture data on a real-time basis. Also, the monitoring of places being made accessible will become more effective as the portal has a provision of uploading images of such features.

Accessible India Campaign also known as Sugamya Bharat Abhiyan, was launched by PM Modi on 3 December 2015, on the occasion of International Day of People with Disabilities (PwD). It was launched as a nation-wide campaign for achieving universal accessibility for PwDs.

The campaign aims to serve PwDs in country and create an accessible physical environment that benefits everyone, not just PwDs.

Several measures undertaken under programme includes- eliminating obstacles and barriers in indoor/outdoor facilities such as schools, medical facilities, workplaces and transport system. The programme also covers places like footpaths, curb cuts and other obstacles that block the flow of regular pedestrian traffic.