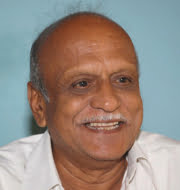 Senior Kannada writer Dr. Malleshappa Madivalappa Kalburgi passed away in Dharwad, Karnataka. He was 77.
Dr. Kalburgi died after he was shot dead by unidentified persons in his residence in Dharwad.
He was scholar of Vachana sahitya (Vachana literature), Kannada epigraphist and academician who had served as the Vice-Chancellor of Kannada University in Hampi.