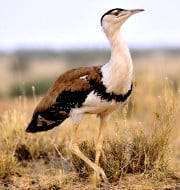 The Supreme Court, while hearing a plea to protect the Great Indian Bustard (GIB), floated an idea of a “Project GIB”, in line with the Project Tiger.

What are the SC’s efforts to conserve GIBs?

The apex court directed the state governments of Gujarat and Rajasthan to install bird diverters (reflector-like structures strung on power cables) in priority areas. It also asked them to assess the total length of transmission lines that needs to go underground.