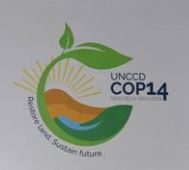 At the end of Conference of Parties (COP) 14, countries party to the UN Convention to Combat Desertification (UNCCD) adopted a series of breakthrough measures in the accord of the New Delhi Declaration.

Features of the Delhi Declaration

The convention through a bottom-up approach helps people, communities and countries to create wealth, grow economies and secure enough food and water and energy, by ensuring land users have an enabling environment for sustainable land management. Through partnerships, the parties to Convention strive to build robust systems to manage drought promptly and effectively.

Entered into force in December 1996, UNCCD is one of three Rio Conventions along with United Nations Framework Convention on Climate Change (UNFCCC) and Convention on Biological Diversity (CBD). UNCCD is the only legally binding international agreement to address the problem of land degradation, desertification and other land issues.