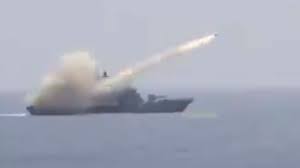 On October 30, 2020, Indian Navy test fired the Anti-Ship Missile from INS Kora in Bay of Bengal. The missile hit the destined target successfully.

INS Kora was commissioned in 1998. It was designed by the Indian Navy under Project 25A. The ship is equipped with Kh-35 anti-ship missiles. There are three warships Kora-class. They are INS Kulish, INS Kirch and INS Karmuk.

The Indian Defence Force has been frequently conducting missiles tests from land, air and water lately. On October 23, 2020, the Indian Navy released a video showing the INS Prabal launching a missile. This was a similar test as that conducted in INS Kora.

What is an Anti-Ship Missile?

It is a guided missile that is usually used against ships and large boats. They were first developed by Nazi Germany.

The Anti-Ship Missiles of India are as follows

Brahmos is becoming the primary anti-ship missile of the Indian Navy. It is the world fastest anti-ship cruise missile in operation. It was developed based on Russian Cruise Missile Technology.