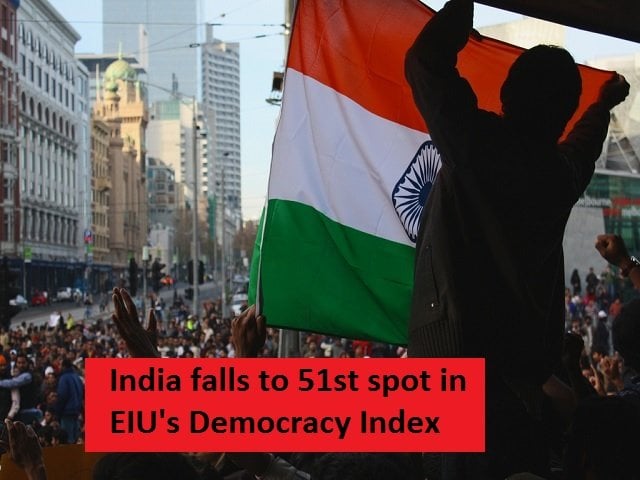 London based the Economist Intelligence Unit (EIU) has released 2019 Democracy Index’s global ranking in which as per the report, India slipped 10 ranks to be placed in 51, this year. The overall score of India also came down to 6.90 from the earlier score of 7.23, the downtrend has been cited due to erosion of civil liberties. India ranks eighth in the Indo-Pacific Region. Countries have been ranked in the index on the basis of five category scores, they are functioning of the government, political culture, civil liberties, political participation and pluralism & process of election. Norway topped the list followed by Iceland, Sweden, New Zealand and Finland making the top five respectively.

The report assesses the state of democracy worldwide in 165 independent states and two territories to prepare the index. According to the report, there are only 22 full democracies, while it places India under “flawed democracies”, which includes countries that hold free and fair elections but have significant weaknesses in democratic aspects. Among Indian Neighbours, China reached close to the bottom of the ranking with a score of 2.26 ranking at the 153rd place, while Pakistan ranked 108th, Bangladesh at 80th place and Sri Lanka at the 69th place in the 2019 ranking.