India to provide tariff concessions on 3,142 items to APTA members 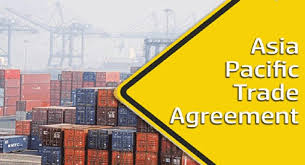 India has agreed to provide tariff concessions on 3,142 products to Asia Pacific Trade Agreement (APTA) members, from July 1, 2018. The tariff concessions are implementation of results of fourth round of negotiations under APTA, which were formally concluded and signed by the ministers of member countries during meeting of APTA Ministerial Council in January, 2017.

With this implementation of the Fourth Round, the coverage of preferences of total tariff lines for each member will come of 10,677 tariff lines (up from 4,270 items at conclusion of 3rd Round). It will also deepen average Margin of Preference (MoP) being provided under agreement to 31.52%. The LDC members are entitled to greater concessions on 1,249 items with average MoP of 81% under special and differential treatment provisions of APTA.

APTA is an initiative under United Nations Economic and Social Commission for Asia and the Pacific (UN ESCAP) for trade expansion through exchange of tariff concessions among developing country members of Asia Pacific Region. It is preferential trade agreement (PTA), under which basket of items as well as extent of tariff concessions are enlarged during trade negotiating rounds which are launched from time to time.
APTA was signed in 1975 and was formerly known as Bangkok agreement (renamed to present name in 2005). UNESCAP’s Trade and Investment Division in Bangkok, Thailand serves its secretariat. It is the first plurilateral and oldest preferential trade agreement among developing countries in Asia-Pacific .The six member countries of APTA are Bangladesh, China, India, Laos, Korea and Sri Lanka.
APTA aims to promote economic development through adoption of mutually beneficial trade liberalization measures that will contribute to intra-regional trade expansion and provides for economic integration through coverage of merchandise goods, services, investment and trade facilitation.