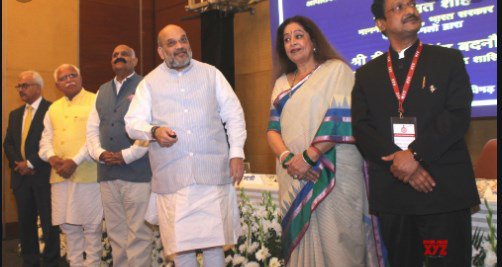 Union Minister for Home Affairs Amit Shah launched three citizen centric services of Chandigarh Police, in Chandigarh. The services launched include- Emergency Response Support System (ERSS – Dial 112), ‘E-Beat Book’ System and ‘E-Saathi App’. Home Minister observed that the beat officer system has been cornerstone of Indian Policing system for ages and by such Citizen Centric Services in Policing, a SMART Police force can be built in India. He congratulated Chandigarh Police to have taken a lead in introducing such Citizen Centric Services in Policing.

ERSS is one of the key projects of Union Ministry of Home Affairs (MHA) under Nirbhaya Fund. It has been designed to play a pivotal role in mitigation/preventing escalation of crime, predominantly against women and children.

‘Dial 112’ emergency response service is an initiative to strengthen proactive community policing that would end confusion amongst distress callers, who at times end up dialing 100 (for police related services) in case of fire/medical emergency cases, therefore, after starting this service, public will not face these problems.

It is a web and mobile based application which will ease collection, updation and analysis of information related to crime and criminals in real time basis. E-Beat Book would be linked with Crime and Criminal Tracking Network & Systems (CCTNS), which would help in a real time updation of crime/criminal data.

It would help general public, including senior citizens, to remain in touch with police and also give suggestions to facilitate participative community policing: ‘Your Police at Your Doorstep’ initiative.

With this initiative, on one hand, where beat officer would become more efficient in their work, this would make police-people communication a two-way process, on the other.