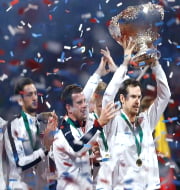 Andy Murray led Great Britain have won the 2015 Davis Cup for first time since 1936 and for the 10th time in the competition’s 115-year history.
Great Britain tennis team defeated Belgium team by 3-1 score in the finals to win the 104th edition of the competition.
Davis Cup 2015 results

The Davis Cup is the premier international team event in men’s tennis organised by the International Tennis Federation (ITF). It was established in 1900 as a tennis challenge between Great Britain and the United States.
Since then, it is contested annually between teams from competing countries in a knock-out format. United States has won the tournament for record 32 times.
The women’s equivalent of the Davis Cup is the Fed Cup. Australia, US and Czech Republic are the only three countries that have won both Davis Cup and Fed Cup titles in the same year.