Gautam Buddha founded Buddhism and is known as Supreme Buddha or ammāsambuddha or samyaksaṃbuddha. He was born in Lumbini, a little principality of Kapilvastu in modern day Nepal. His childhood name was Siddhartha. He was son of Shuddodhana a leader of the Shakya clan. The capital of this Sakya clan was Kapilvastu and it was not a monarchy but a sort of Republic. Queen Mahamaya was the name of mother of Gautam Buddha. The birth of Buddha is celebrated as Vesaka in some countries. In India, it is Buddha Purnima. 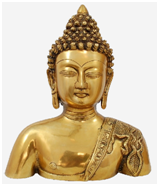 Queen Mahamaya died soon after his birth and Maha Prajapati or Prajapati Gautami raised him. He was a prince so he had lived his early childhood in luxury. His father wished him to be a great king and so he was shielded from the religious teachings or human sufferings. However, as a child Gautama used to be absorbed in philosophical musings. He got married at the age of 16 with Yashodhara. She gave birth to a Son, Rahula. At the age of 29, while going to meet his subjects he encountered human sufferings such as old age, death and diseases. He used to ask his charioteer Channa about these sufferings. He deeply depressed by the truth that human life is momentary and one has to suffer a lot. He left his home at the age of 29 years, so that he could overcome old age, illness and death by living a life of an ascetic. This is called “the great departure’ or Mahabhinishkramana.


He first went to Rajgriha Rajgaha or Rajgir. He started begging alms over there and living life of an ascetic. The King Bimbisara after a request from Shuddodhana, launched a search and Siddhartha was recognized by the men of Bimbisara. Bimbisara offered him a throne, but Gautama refused. He left Rajgir but promised Bimbisara to visit his capital Magadha, later. Siddartha studied under two hermits Alara and Udaka. He achieved high knowledge and was asked to succeed Udaka, but he was not satisfied with the path and his goal so he refused.

The experiments with the life of ascetics could not bring desired fruits for Gautama. He left the Udaka, and moved on with 5 companions who were led by Kaundinya. They set out for more austerity. They tried enlightment through total deprivation of possessions including food. This led him to starving near death condition, and one day he collapsed into a river and almost drowned. This led him to reconsider the path. He started moving away from ascetics and moving closer to meditating and this is called the Middle Path, the path of having oneself away from extreme self-indulgence and extreme self-mortification. He accepted milk and rice pudding from a village girl called Sujata.

While meditating under a Pipal tree on the bank of river Niranjana at Gaya, he came across the desired truth, at the age of 35 years and after 49 days of meditating. He was now called Buddha or “Shakyamuni Buddha” which means the Buddha of Shakya Clan.

Gautama Buddha now preached his first sermon which deals with the Four Noble Truths and the Noble Eightfold Path, the core pillars of Buddhist teaching regarding the intrinsic suffering of existence and how to deal with it. This was called Dhammacakkappavattana Sutta. Kaundinya & 4 others became the first human beings to be taught Buddha ‘s teaching and become an arhat (spiritual practitioner). This event took place at Deer Park near Varanasi.

Two gems of Buddhism viz. Buddha and Dhamma ware now ready. The five disciples and Buddha formed the first union of Buddhism, which is called Sangha. So, with the formation of a Sangha, the three gems of Buddhism (Buddha, Dhamma and Sangha) were completed. The reaming years of life, Buddha travelled many parts of the country, established the Sangha, and propagated his teachings. Thousands of people joined Sangha and these Sanghas spread in many parts. As promised previously Buddha now travelled to Magadha, the capital of King Bimbisara. During this visit Sariputta(who later founded Theravada tradition) and Mahamoggallana became Buddha’s disciples. Sariputta, Mahamoggallana, Mahakasyapa, Ananda and Anuruddha comprised the five chief disciples. His ten foremost disciples were completed by the quintet of Upali, Subhoti, Rahula, Mahakaccana and Punna. Rahula was his son, who became disciple at the age of 7. Buddha’s parinirvāṇa happened at Kuśinagara at the age of 80 years.