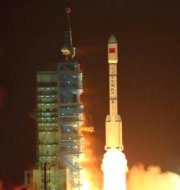 Note: The Tiangong-2 and its predecessor, Tiangong-1 (launched in September 2011), are prototypes for China’s ultimate goal to launch a permanent 20-ton space station after 2020 just as International Space Station (ISS). It will make China potentially the only country with a permanent space presence. In 2003, China had conducted its first crewed space mission becoming only the third country after Russia and the US to do so.