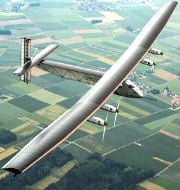 The Solar Impulse 2 has become the first aircraft to circle the globe using solar energy after landing in Abu Dhabi on the last leg of its journey.
In its journey, the long-range solar-powered aircraft has travelled 26744 miles across four continents, three seas and two oceans since setting off from Abu Dhabi in March 2015.
Key features of Solar Impulse 2