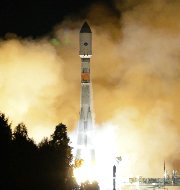 Russia’s newest defence satellite dubbed as EKS Kosmos-2510 was successfully launched into space and has been placed into its dedicated orbit.
It was launched using Russian Soyuz-2.1b carrier rocket from the Plesetsk Cosmodrome which is a military facility in north-western Russia’s Arkhangelsk region.
After placing it in dedicated orbit, the control of satellite has been passed to the Titov Main Space Center of Russia’s Space Forces.
Key facts

This successful launch marked the sixth consecutive space mission to lift off from Plesetsk in year 2015. It was the fourth launch using a Soyuz booster and overall 13th launch of the Soyuz rocket family in 2015.

A Space Mining Startup of China recently launched NEO-01. It is a robotic platform launched into the...