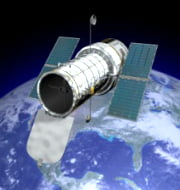 Exoplanet: It is a planet that does not orbit the Sun and instead orbits a different star, stellar remnant, or brown dwarf. It is also termed as extrasolar planet.
Goldilocks zone: It refers to a habitable zone in the planetary system where the temperature is neither too high nor too low. Such conditions could allow for the presence on the planet’s surface of liquid water – a key ingredient for life.