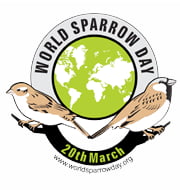 The world sparrow day is being observed every year on March 20 to raise awareness of the house sparrow and other common birds to urban environments and threats to their populations.
The day was celebrated globally by carrying out different activities and events like awareness campaigns, art competitions and the sparrow processions.
The rationale for celebrating the Day is to use it as a platform to underscore the need to conserve sparrows as well as the urban biodiversity.
Uttar Pradesh Chief Minister Akhilesh Yadav on the occasion of this day inaugurated a sparrow conservation programme at school levels.
The sparrow, especially the common house sparrow is one of the oldest companions of human beings. But its population is declining for various reasons such as destruction of its habitat, lack of insect food for the young and the increasing microwave pollution from mobile phone towers.
World Sparrow Day
It is an international initiative by the Nature Forever Society (NFS) of India in collaboration with the Eco-Sys Action Foundation (France) and also numerous other national and international organisations across the world. For the first time, the World Sparrow Day was organised in different parts of the world in 2010.