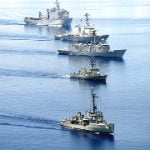 For this edition of exercise, Royal Navy will be represented by HMS Dragon, a Type 45 Class Destroyer equipped with integral Wildcat helicopter. Indian Navy will be represented by INS Kolkata, the first ship of latest Kolkata class destroyers, equipped with integral Seaking and submarine and maritime patrol aircraft Dornier. The thrust of exercise this year is on Anti-Air warfare, Anti-Submarine Warfare, Anti-Surface Warfare, Visit Board Search and Seizure (VBSS) and seamanship evolutions. Besides exercises at sea, it will also encompasses professional interactions and sports fixtures.

Naval cooperation between India and United Kingdom is based on long term strategic relationship between both countries. Both Navies have, over years have undertaken bilateral activities such as training exchanges and technical cooperation. Bilateral KONKAN exercise was started in 2004 and since then has grown in scale. It provides platform to periodically exercise at sea and in harbor so as to build interoperability and share best practices.
The exercise is aimed at deriving mutual benefit from each other’s’ experiences and is indicative of continuing cooperation between two countries. The inter-operability achieved over years as result of such exercises has proved to be operationally beneficial to both navies. The naval cooperation is tangible symbol of commitment of both nations in ensuring a positive climate at sea for enhancing strategic stability and promoting economic prosperity.