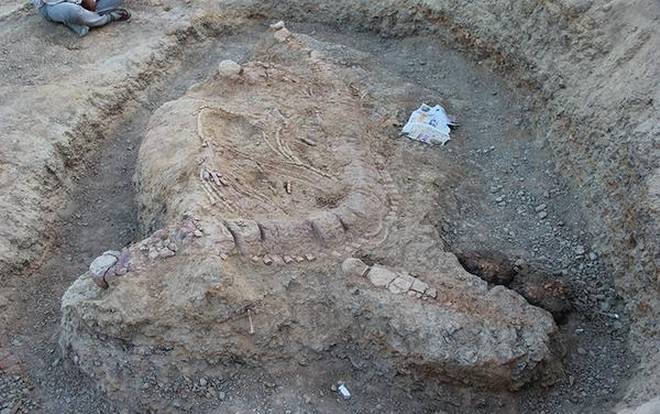 Geologists for the first time have discovered 152 million-year-old fossil of Ichthyosaur, an extinct marine reptile in in Kutch desert region of Gujarat. The specimen belongs to Ophthalmosauridae family of ichthyosaurs that lived in oceans between 165 and 90 million years ago.
The 5.5 m long fossil was found inside rocks from esozoic Era, which ran between 252 and 66 million years ago along with fossils of ammonites and squid-like belemnites. The detail examination fossil’s teeth suggested that it was top-tier predator in its ecosystem and ate animals.

Ichthyosaur (or fish- lizards in Greek) was large reptile that lived at same time as dinosaurs. They were often misidentified as swimming dinosaurs and they first appeared in early Triassic period. It was noted for its sharp, robust teeth. It became extinct before dinosaurs, dying out in early part of late Cretaceous period.

Until now many ichthyosaur fossils were found in North America and Europe and fossil record in Southern Hemisphere was mostly limited to South America and Australia. The discovery throws light on evolution and diversity of ichthyosaurs in Indo-Madagascan region of former Gondwanaland. It also shows India’s biological connectivity with other continents in Jurassic. It may also give information in marine connection between India and South America about 150 million years ago.
Earlier too, researchers had discovered evidence of ichthyosaurs from Ariyalur, Tamil Nadu in 2016 which belonged to prehistoric India, but these remnants were only fossils of teeth and part of vertebra. However, in Kutch, researchers reported finding of vertebral column, neural spines, ribs and part of snout.

The Gujarat Land Grabbing (Prohibition) Act, 2020 recently came into force in the state of Gujarat. ...