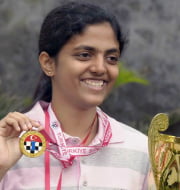 India’s Chess Grand Master Harika Dronavalli has won the Fide Women’s Grand Prix trophy in Chendu, China. It was her maiden career GP title.
She won this title by defeating Russia’s Olga Girya. She finished on 7 points in the round robin tournament which had featured world’s top 12 players.
On the other hadnd India Grand Master Koneru Humpy too rounded off her campaign with a victory to also finish on 7 points. But Harika was declared winner for finishing with a better tie-break record in the tournament.