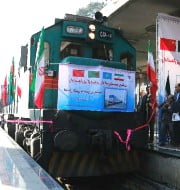 A freight train connecting Russia with China arrived in Ganzhou an inland city in Jiangxi province, carrying goods from Moscow. The freight train travelled more than 7,000 km, before reaching Ganzhou in eastern China.

Jiangxi province is the former revolutionary heartland of the Communist Party. This freight train connecting Russia and China is expected to bring resources from Europe and boost local development. Ganzhou is an inland area with a complex landscape and was a hot bed of revolutionary activities owing to its remote mountain ranges. However, its complex landscape has become a stumbling block in development. Even though, the Chinese government tried to push regional development in the past few decades, Ganzhou could not fetch any major projects due to its geography, making many people to live in poverty.
Rail freight is cheap and costs only half that of air freight and half the time of sea freight. In order to boost its export revenues, China is already operating train services to several cities in Europe. In January 2017, it inaugurated a new train service to London traversing over 12,000 kilometres across 18 days. China is set to gain heavily from opening the ancient trade routes and strengthen connectivity with Europe. It would also enhance regional cooperation in countries that lie along the Silk Road.