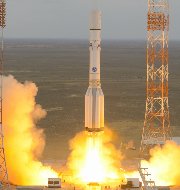 An unmanned spacecraft named ExoMars 2016 was successfully launched jointly Europe and Russia to search for biosignatures on Mars (or Martian life) in past or present.
The spacecraft was launched on a Proton-M rocket operated by Russia’s Roscosmos from Baikonur, Kazakhstan. ExoMars 2016 is the first of a two-phase of ExoMars (Exobiology on Mars) program.

At present there are two rovers functional on the Mars viz. Curiosity and Opportunity which were sent by NASA, the federal space agency of United States.