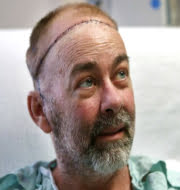 Doctors from Texas State of United States have done the world’s first partial skull and scalp transplant from a human donor.
This rare medical feat which opens new frontier in transplant surgery was achieved by team of Doctors from Houston Methodist Hospital and MD Anderson Cancer Center.
The recipient patient was Jim Boysen, a 55-year-old software developer who had suffered a large head wound from cancer treatment
In a 15-hour transplant operation about a dozen doctors and 40 other health workers were involved. In this operation, Boysen was given a cap-shaped, 25-by-25 centimeter (10-by-10-inch) skull graft, and a 38-centimeter (15-inch)-wide scalp graft.
This transplanted part extends from patients forehead across the top of his head and over its crown. It ends 2.5 centimeters above one ear and 5 centimeters above the other.
It should be noted that in 2014 doctors in the Netherlands had replaced most of a woman’s skull with a 3-D printed plastic one.

The United States has officially re-joined the Paris climate accord on February 19, 2020. It has joi...

The Joe Biden administration in United States is all set to re-join the UN Human Rights Council. The...