Events, Happenings & Observances:
“Yodha Shakti” & “Azm-e-Nau”
Yodha Shakti is the name of the month-long war games scheduled to be conducted by Indian Army in mid-April in the Thar desert of Rajasthan. This will be India’s biggest war-game exercise ever. At the same time Pakistan army is organizing similar kind of wargame – Azm-e-Nau (New Resolution) on the Pakistan side of the Thar Desert.

The foundation stone of this project was launched on 5th April 1961, by Gujarat’s first Chief Minister Dr Jivraj Mehta.

On 5th April 2010, the project enters its 50th year.
The project was first conceived by Jawahar Lal Nehru in 1940s. At that time the aim was limited to iirigation of the Bharuch district and some adjacent areas. It was vision of Sardar Vallabh Bhai patel , that harnessing the excess waters of Narmada river will quench the thirst of the water starved areas of Gujarat.

However it took decades to take the project form of development scheme to increase irrigation and produce hydroelectricity.

The Narmada Valley Development Plan (NVDP) came in 1979, which envisaged 30 big dams, 135 medium dams and 3,000 small dams on the Narmada and its tributaries.

The project would irrigate 18000 square kilometers of land spread over Gujarat and Barmer, Jalor districts of Rajasthan.

Assam : Baideu & Nabou Schemes:
Baideu & Nabou are two new schemes started by the Assam state government. These ambitious projects are for the benefit of unmarried women and widows respectively. Baideu means elder sister and this scheme targets unmarried women who are above the age of 45 and living below poverty line. Nabou which means Sister in law targets the widows living below poverty line. The scheme involves financial assistance of Rs 3,000 each annually and one-time assistance of Rs 10,000 to each beneficiary.

e-Office of Finance Ministry:
Finance Secretary Ashok Chawla initiates e-Office programme directed towards a paperless office by enabling access to internal information for its employees through any computer. The E-office has been developed by National Informatics Centre (NIC). Its going to be a platform for personalized, role based, secure access to internal information for the employees that is accessible through any browser.

Some features of the programme are unified view of data, content and document management, collaboration and messaging services with SMS interface, single standards based directory service, identity and access management role and integration of applications.

Rajasthan: New Air field in Phalodi
Phalodi which was called as Phalvardhika in ancient times is a strategic town located in Jodhpur District of Rajasthan. A new Indian Air Force (IAF) airfield equipped with modern infrastructure is to be inaugurated by Chief of the Air Staff, Air Chief Marshal PV Naik at Phalodi. Its location between Jaisalmer and Jodhpur spans the distance between these two important air bases of Indian Air Force.

Highest paid CEO in United States: Larry Ellison
Larry Ellison, co-founder and CEO of Oracle Corporation, a major enterprise software company emerges as the highest paid CEO in the US. His pay packet was $84.5 million. Ray Elliott of Boston Scientific is at the second place ($33.4 million). The listing has been published by cnnmoney.com

Red Dot Product Design Award – BPL Studylite
BPL Studylite is India’s first eco-friendly rechargeable LED study lamp. It has been chosen from 4,252 entries across a field of around 1,635 companies from 57 countries across the world and is the only Indian product to win a Red Dot Award in 2010. It bags Red Dot Product Design Award in the Lighting category.

Red Dot award is one of the most prestigious International product design awards and denotes international seal of quality for outstanding design.

Bankers meet RBI:
Chief of Indian Bankers Association, M.V. Nair and chiefs of some big banks meet RBI ahead of RBI’s annual monetary policy due to be released on April 20.

Factbox : NABARD: It was established by an act of Parliament on 12 July 1982 to implement the National Bank for Agriculture and Rural Development Act 1981. It replaced the Agricultural Credit Department (ACD) and Rural Planning and Credit Cell (RPCC) of Reserve Bank of India, and Agricultural Refinance and Development Corporation (ARDC). It is one of the premiere agencies to provide credit in rural areas. The main business of the Bank are long-term and short-term refinancing, plus funding under Rural Infrastructure Development Fund.

NABARD has appointed The Boston Consulting Group to prepare a roadmap for the future.

Sports:
Jumbo: Mascot for 2011 World Cup‎
Jumbo, an elephant is the mascot of ICC Cricket World Cup 2011. It was unveiled on April 2, 2010. It is after 28 years that elephant, which was chosen as the mascot for the 1982 Asian Games in New Delhi. 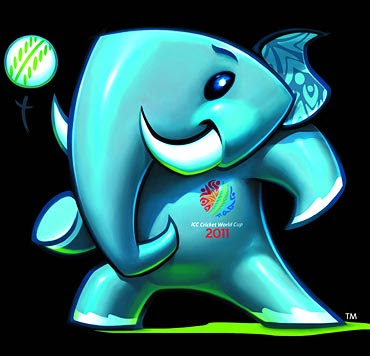