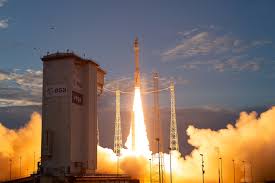 India recently launched the CMS-01 communication satellite into the Geostationary Transfer Orbit. It was earlier called the GSAT-12R. The satellite was launched on a PSLV-C50 launch vehicle.

About the CMS-01 Satellite

It includes frequencies ranging from 4 GHz to 8 GHZ. These frequencies are generally used for communication transmissions, Wi-Fi, weather radar systems and surveillance.

Following CMS-01, ISRO is to launch EOS-02 in its new Small Satellite Launch Vehicle. Also, India is to launch GISAT-1, a Geo-Imaging Satellite in its GSLV-F10 and Microsat-2A. India recently drafted its SpaceCom Policy that is expected to revolutionize the space sector of India.

The Government of India has permitted space reforms by allowing the participation of private players. The draft Spacecom was released by ISRO. The SpaceCom Policy, 2020 aims on the following