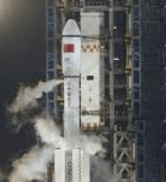 China has successfully docked its first cargo spacecraft Tianzhou-1 with the Tiangong-2 space lab. It is hailed as a major step towards China’s ambition of establishing a permanently manned space station by 2022. China has an ambitious plan of building a permanent space station by 2022, that will be in the orbit for at least 10 years. Tiangong-2 (Heavenly Palace 2) space lab was home to two astronauts for a month in last October. T It was China’s longest-ever manned space mission. iangong-2 was put up into space on September 15, 2016.China has prioritised advancing its space programme to strengthen national security.
Tianzhou-1 is a tube-like craft which is capable of carrying 6 tonnes of goods, 2 tonnes of fuel and can fly unmanned for three months. It is considered that the cargo spacecraft has provided an important technological basis for building a space station. According to Chinese sources, Tianzhou-1 will dock two more times with Tiangong-2 before falling back to Earth.
Despite its achievements, China still lags behind the United States and Russia. For instance, in 2013, China’s rover, ‘Jade Rabbit’ which landed on moon faced many technical difficulties.

The US Defence Department has accused China of pursuing activities that are aimed at preventing other nations from using space-based assets in a crisis. However, China has refuted such claims and has stated it has only peaceful ambitions in space, but has tested anti-satellite missiles. In 2011, the US Congress ordered that Chinese astronauts should not be allowed to enter International Space Station (ISS) owing to national security concerns.