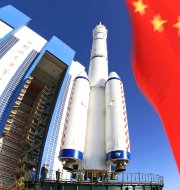 China has successfully launched remote sensing satellites designed to conduct electromagnetic probes and other experiments.
The satellites whose numbers were not specified yet were launched on board of Long March-2C rocket from Xichang Satellite Launch Center in southwestern Sichuan province.

The satellites were carried by Long March-6 rocket, a new generation of liquid-fuelled carrier rocket developed by China Aerospace Science and Technology Corporation (CASC). The launch was the 256th mission of the Long March rocket family.
These satellites have successfully entered their preset orbit and they will conduct electromagnetic probes and other experiments. China earlier had launched three remote sensing satellites designed to improve observation capability to promote commercial use for the remote sensing industry.