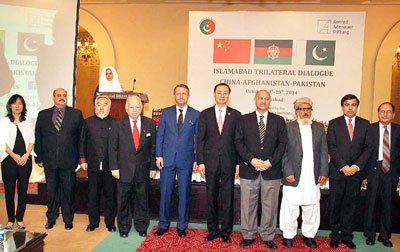 China, Afghanistan and Pakistan held a trilateral dialogue to chalk out a roadmap for regional cooperation and strengthen ties with each other. This is the second such dialogue. The first dialogue was held in 2013 in Beijing.

The two day dialogue consisting of officials and experts of the three countries was organised by the Pakistan-China Institute (PCI) and German agency Konrad Adeneaur Stiftung.

This dialogue was conceived to act as a vital platform to strengthen communication and cooperation among the three nations. The parties involved discussed presence of Afghan refugees in Pakistan, cross-border terrorist movement, capacity of the Afghan national security forces, protection of foreign investments in Afghanistan and the role of regional countries in promoting peace, stability and security in Afghanistan and surrounding region. Protection of foreign investments was especially an issue with China, which is Afghanistan’s largest investor.